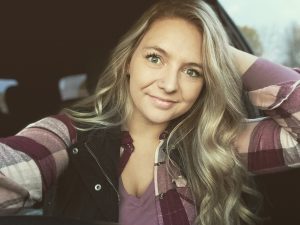 Krysti has been with MAC as the Middleton Accounting Assistant for two years and counting. Her involvement in agriculture began when she started milking cows on a dairy farm in Stanton when she was 13 years old. She graduated from Carson City Crystal High School, and also has an Associates in Accounting from Montcalm Community College and a Certificate of Dairy Management from Michigan State University.

Since she likes to be busy, at one point, Krysti was attending school full time, in a work study for the student services accounts payable department, and also working on the farm nights and weekends. After college, she started her career with Isabella Bank as apart-time teller, working her way up to Assistant Manager of their main location. We’re grateful she shifted back to agriculture and brought her experience to our Middleton team in 2019.

Krysti would tell you that in her position, they are always doing something different, so the job never feels mundane. Working with farmers allows her to combine her love of agriculture with her education, so she feels like she is living the dream. Krysti also enjoys the Middleton environment, where she says it’s uplifting with everyone joking and laughing; the people she works with certainly make coming to work easier, too.

In her position at MAC, Krysti has learned many roles, which she has enjoyed – some days, she’s billing fertilizer or in the fall, she’s cutting grain checks daily. Most recently, she’s been helping work the scale and getting even more customer interaction. Krysti feels like everyone is a team player and at the end of the day, our customers satisfaction is the number one goal the entire team works really well together to reach. Krysti also appreciates being able to be a person who can step in wherever she’s needed as she’s learned so many roles, which is important to the team.

For her favorite time of year, Krysti likes the warm summer nights. She has two boys, Dawson (4) and Jackson (1) and enjoys being outside as much as possible with them, swimming, playing sports, and catching fireflies. Krysti loves watching them play together and teach each other things. She also enjoys homesteading and living on the farm with her boyfriend, Douglas Weaver. They raise beef cattle and will be getting meat chickens this spring. Her boys also enjoy being involved with the farm, both loving feeding calves and watching all the barnyard animals. Krysti is very much looking forward to the day they get to enroll in 4-H & FFA!

As we head into spring and summer, you might find Krysti at her favorite Michigan destination: Higgins Lake. She might even be enjoying her hands-down favorite BBQ meal of a medium rare ribeye steak hot off the grill. But, during the week, we’re glad you’ll probably find her in our Middleton office!