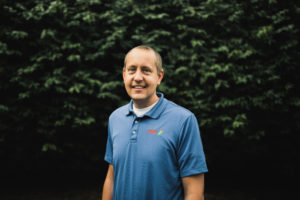 As the grandson of our founder, Herm Geers, you could say Robert grew up here, but he has officially been with MAC for 16 years. Robert graduated with a B.S. from Calvin College and has worked in multiple roles at the Lansing office, including Hedger, FOB Farm Merchant, and Corn & Soybean Trader. Today, he is the Vice President of Merchandising/Trading.

In Robert’s role, he gets to see both sides of production agriculture: from what the producer is doing and thinking, as well as what the end users are doing and thinking. As MAC continues to evolve forward, he is looking forward to working closely with Chris Betz (from our last Meet MAC Monday) on our wheat position.

When it comes to favorites, Robert likes fall harvest best about working in agriculture, as it’s the culmination of a years worth of work. When it comes to MAC, he appreciates working with experienced, committed employees that work together creating a team atmosphere.

Outside of work, Robert and his wife Olivia (who works part time as a Nurse at Sparrow Hospital) have two sons keeping them busy, Jacob (4) and Lucas (3). He enjoys spending weekends during both the summer AND winter at their family cottage on Houghton Lake – which is also his favorite Michigan destination! In the winter, they like to snowmobile, snow tube or snowboard. During the summer, they enjoy spending time on the boat.

Just for fun, Robert’s favorite food is a breakfast pastry and dark roast coffee. It’ll be great when we get back to normal gatherings and serve both up for him!