The Tuesday/Wednesday collapse in Ag contract values was somewhat unexpected as forecasts going into last weekend were rather bullish. The forecasts got a bit cooler and wetter on Tuesday and the selloff moved into high gear. The other dynamic affecting ag values was the general deflation of vegoil and energy markets. Look at the charts below. Its no wonder ag values took a hit.

July corn is currently trading below its 20-day moving average for the third session in a row and stochastics point to lower values. Support comes in at 745. This contract will have to exceed it 50-day moving average, 780, to regain a bullish posture. Considering that 14-day precipitation forecasts lack significant moisture producers should stand aside for now or use sell stops at 736.

December corn has made a very damaging move this week. Trading today below its 100-day moving average, 680, for the first-time tine September 2021 and poised to make a new bearish cross of the 10/20-day moving averages. I’m not too concerned about the potential of the 10/20 dma cross as there is still time to see a new weather concern to take place. A close below 680 will be damaging. Stochastics are oversold.

One of the concerns is that 60% of the country’s corn crop was planted in a narrow two-week period making the crop vulnerable to a weather issue during pollination. The forecasts for the first two weeks of July will be critical.

July soybeans are in a very bearish mode today trading below its 100-day moving average, 1648, for the first time since December 2021. Note in the chart below that we have dipped to Fibonacci support at 1560/1580 a couple of times but those numbers at the time did not exceed the 100 dma. A close below 1648 will be damaging. Stochastics are oversold.

November soybeans made its first close below its 100-day moving average yesterday for the first time since December 2021. This contract is oversold and is looking for support. That support will only come from the weather forecasts. Watch closely.

July wheat is a complete disaster. Poised to make a new bearish cross as the 10 dma is about to cross below the 100 dma puts a firm top in this market. Support falls to 899.

This month we will go over the nitrogen price action at NOLA and couple grain charts I think you will find useful to put things into perspective. Also, I have included the latest breakeven charts with current price economics.

You can also find this article I wrote over the weekend about how monetary and fiscal policy might be repeating history with a few quirks (some major ones) and how it will effect farmers going forward. It is a bit long and deep but I wanted to get thoughts down on the big picture and then I will try to go into more detail on subtopics later. I bombed English in school so please bear with the grammatical dysfunction.

Nitrogen:
Last week I saw a signal from the annual game of chicken between the corn grower and nitrogen producer.

We are seeing a reduction in forward buying of 2/3 of the normal October-March business.  There are two primary reasons for the delay in purchasing nitrogen. 1.) Prices are off the charts so a portion of farmers have basically told their input salesman to go “pack sand” and therefore taking the risk of buying in season. 2.) There is a portion of farmers who truly will adjust acres and are using that indecision as a reason for postponing the purchase.

If you take the delayed purchasing of urea in US market and a lack luster world demand you find REAL softness in the current market. Fertilizer traders on the river have been bulled up for the past three months stating that world urea prices are 100 dollars over US values and we will have to come up to encourage imports. I respectfully disagree, I think US prices are cheaper and will remain cheaper for three reasons. 1.) we have increased North American capacity in nearly a straight line up for the past 7-10 years now with enough capacity to meet demand at home and beyond. 2.)We have cheap gas so there is a serious incentive for North American producers to compete for the local market business regardless of the tariff situation. 3.)Imports will flow to the US as we are the deepest and most liquid market. Sure you are getting paid with inflated US dollars at a discount to world values but at least you are getting paid and we can absorb big volumes in the river system with high liquidity….I call it the SAMS CLUB effect.

With the delayed purchasing decision you could see prices spike as planting begins and tons are bid up. HAVE A PLAN!!

As you can see below, corn prices have stayed up and urea prices have corrected lower causing the relationship to move in your favor. Will we get back to the yellow? I doubt it for pre-plant but expect we will by the time side dress season hits. 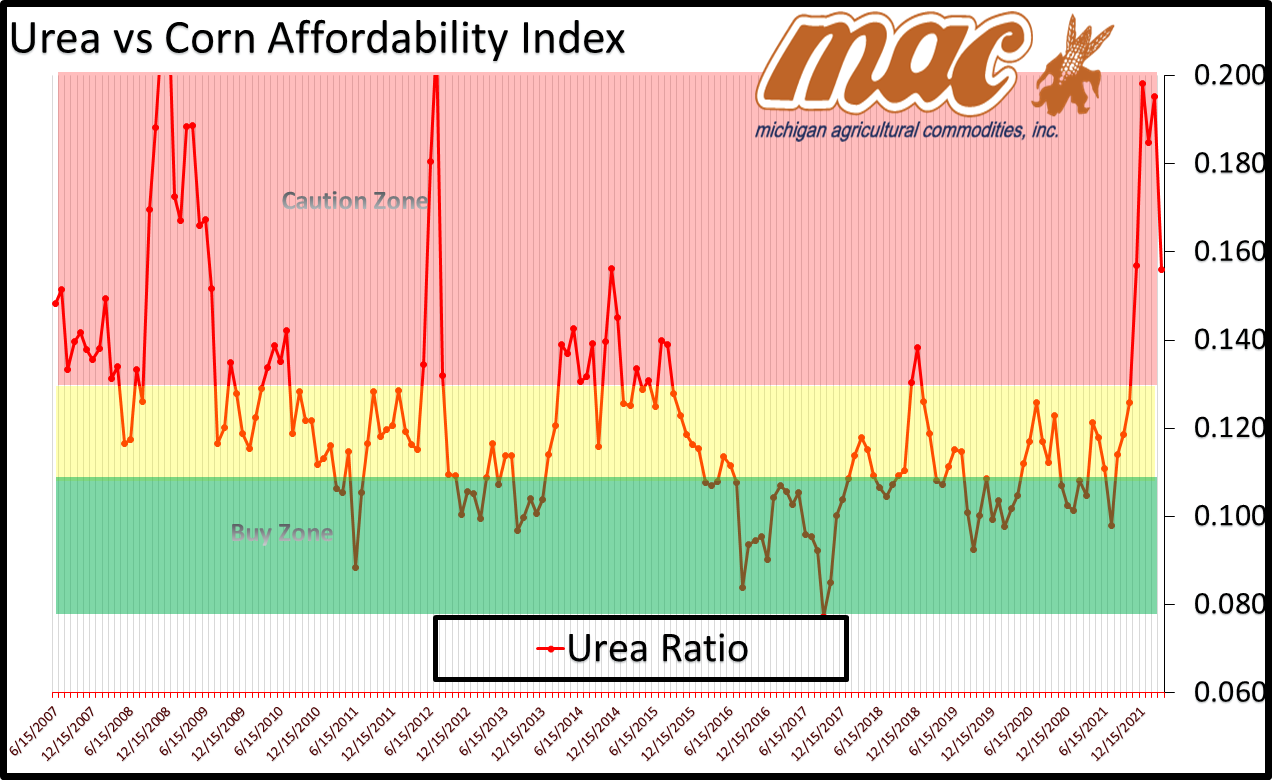 As you know from previous updates the 28% market will lag the urea market as the concentration of producers allow them more price control. However, urea at today’s levels will make some growers think twice about liquid($1.07/#) vs dry($0.79/#) for a difference of $56 bucks an acre at 200# actual……..ouch!!.

28% should drop to match urea in season as no N producer wants to miss a pound of business. FYI…the cost to produce a ton of urea today is sub $180 ton, the incentive is clear!!

Below the 28 ratio chart is a bit “sticky” at the higher prices. There has been decent sales volume on the liquid to date and the producers are content with current pricing. Also remember that liquid UAN has the tariff protection as an added security layer for North American producers.  I believe congress is taking some heat from farm groups to drop the tariff protection as inflated food prices are not in anyone’s best interest. Ag policy is a big ship…takes a while to correct course. I still expect a price correction in mid spring to the side dress timeframe….maybe sooner if farmers and retailers stop buying forward units. 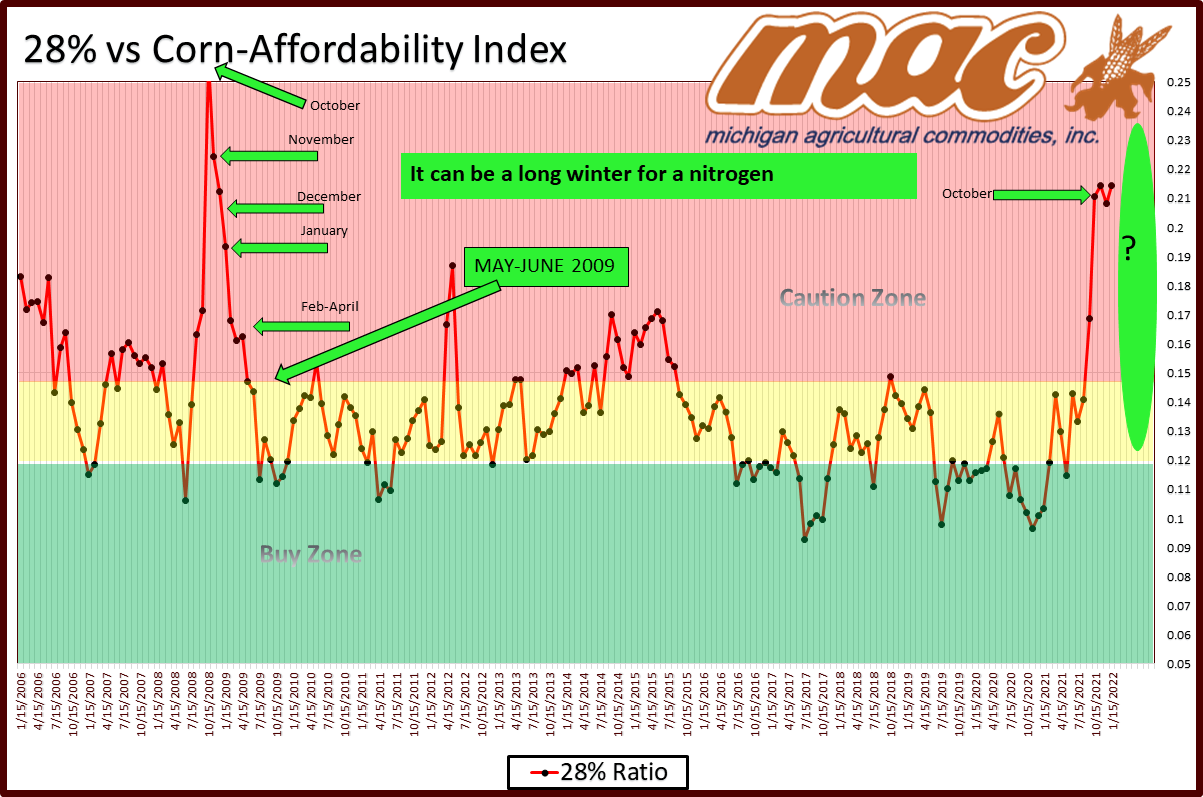 Not much of anything is happening in this market. Winter fill prices were set in the 750-775 range. I don’t think we will see any price changes till after spring.

There are imports still coming inland but the supply chain was nearly empty so it will take a while for prices to come under pressure. 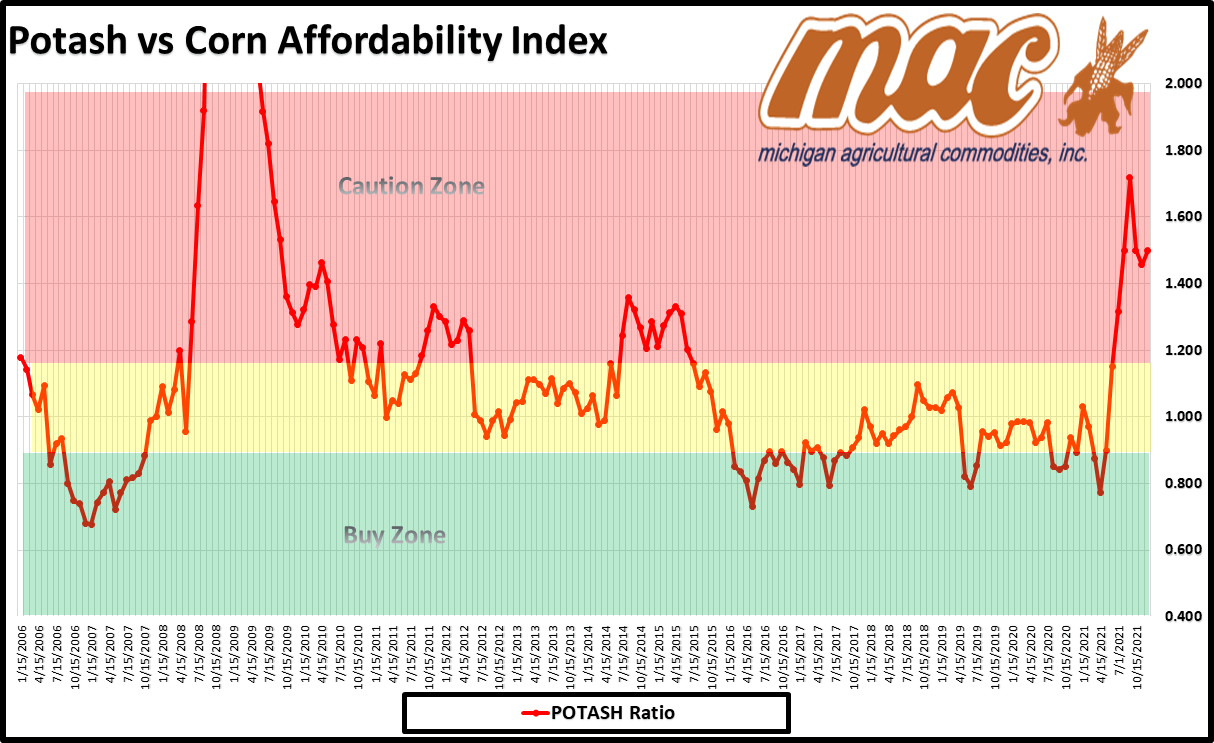 Map price was the first to receive tariff protection and pricing has been stuck at the highs since around August. Current price range is 850-950.

I think we will see a reduction of phosphate rates applied to the 2022 crop, which will surprise phosphate producers and will be the catalyst for lower prices next summer/fall. 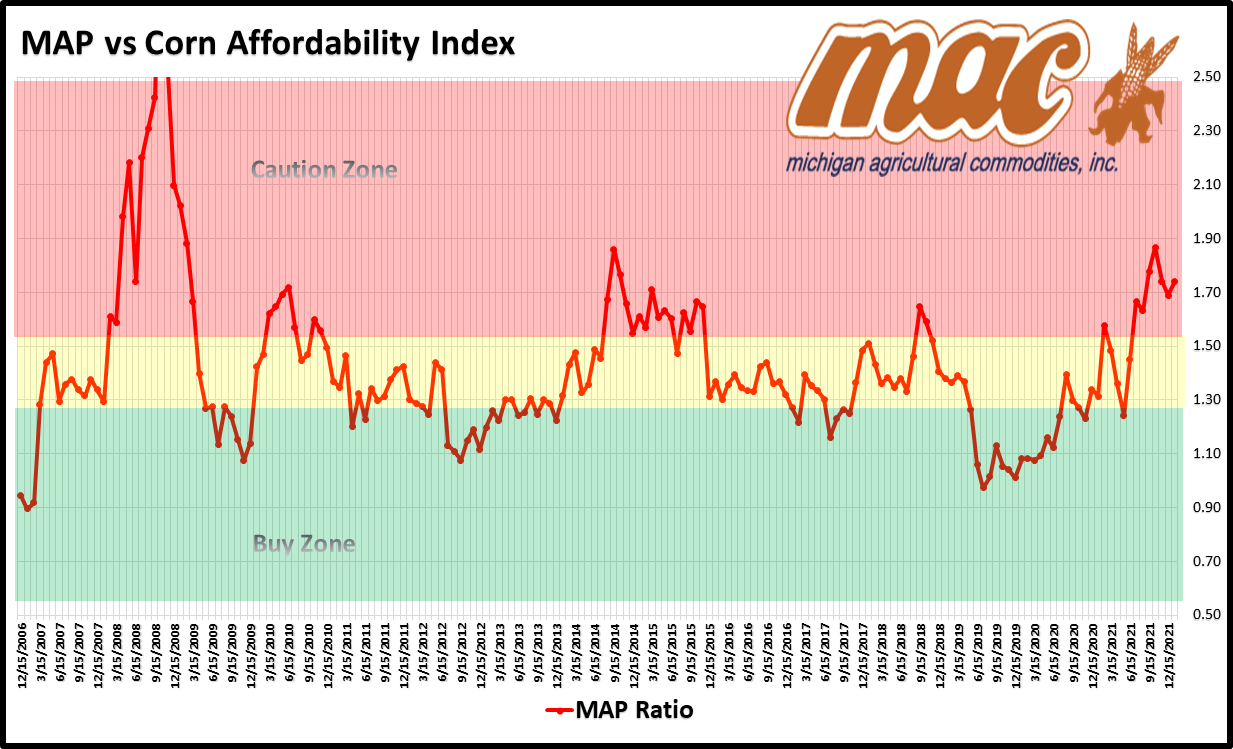 I wanted to add a section on Pell Gyp. We handle a product call Sul4R-Plus. It is 17%S and 21%C. With current high prices of inputs a lot of guys are talking about cutting rates on P and K and “mine” some banked minerals that were built up when prices were more reasonable. If you decide to do that I think you should make sure your PH is perfect and don’t skimp on Sulfur!! With AMS prices at its highest point in years Sul4R-plus is an excellent alternative to AMS and is priced competitively with some clear agronomic benefits.

Learn about how Sul4R-Plus will benefit your farm here.

Ken Lake adds commentary to the charts below. I think when you look at the input ratio charts above and then look at the corn price charts below it should really reinforce the fact that as you purchase fertilizer you should seriously consider locking in the corn price on a portion of production to cover the expense. If you buy inputs without selling outputs you stand the risk of the spread working aggressively against you. 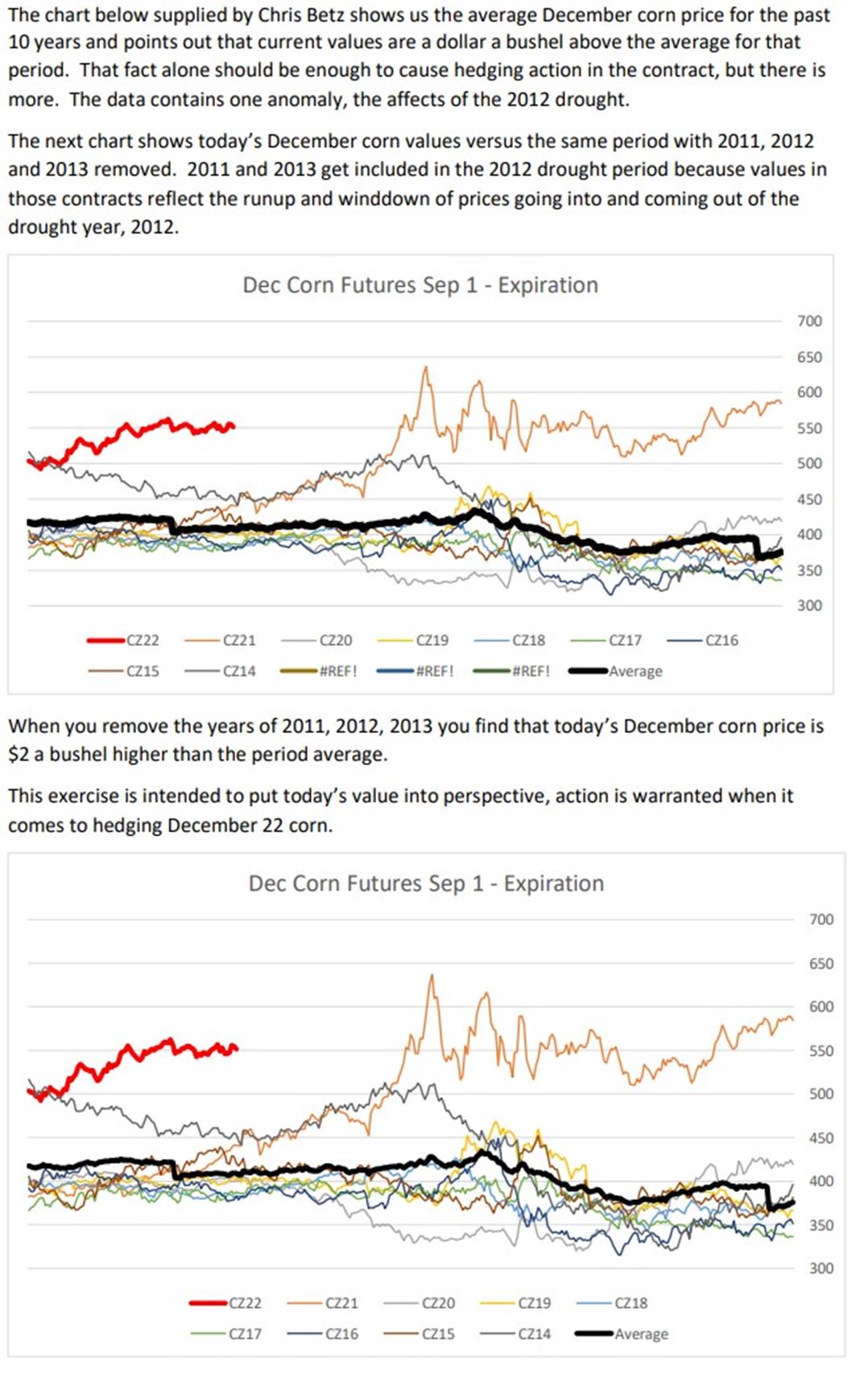 Everyone has a different structure but this can help you establish marketing programs for your farm. If you want the full excel file where you can adjust too your own numbers shoot me a message and I will forward it on.

We appreciate your past business and look forward to earning it every year.

A lot of talk in our industry about supply issues. I agree there will be some problems here and there but for the most part I expect inputs to be available. The price may not be desirable so keep optionality in your plans this spring.